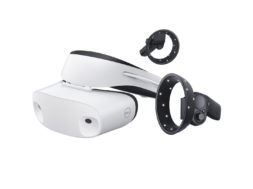 Earlier this year, Dell announced that they’ll be launching a VR headset called the Dell Visor in partnership with Microsoft for the upcoming Windows mixed reality platform.

Engineered with a flip-up visor for ease and maneuverability, the upcoming VR headset features well-cushioned head and face padding, thumbwheel band adjustment for personalized comfort, and smart weight balancing that takes some of the pressure off.

“As a driving force in the virtual reality space, Dell has developed one of the broadest portfolios of VR-ready devices – notebooks, desktops, mini-PCs and AIOs – and end-to-end VR solutions, from creation to consumption to storage,” said Dell in their press release. “In partnership with Microsoft, Dell blazes into the mixed reality future with the sleek and comfortable Dell Visor – its first-ever headset for Windows Mixed Reality platform.”

The Dell Visor VR headset will come equipped with inside-out tracking cameras with a 360-degree panoramic view which allows the headset to scan your surroundings instead of satellite emitters positioned inside the room.

The upcoming headset will have a 1440 x 1440 display that the HP and Acer have as well. There aren’t many other technical specs available at this time.

Dell will also be launching the upcoming Windows VR motion controllers to go along with the Visor. The new controllers will offer complete flexibility with six degrees of freedom of movement in a three-dimensional space, and allow total control with haptic feedback, thumb stick and buttons fully tracked by sensors in the headset.

Dell has stated that the new Visor VR headset will go on sale starting October 17th, 2017 for $349. The Windows VR headset will also launch at the same time for $99. They will be releasing a bundle for both at $449.

The headset is available for pre-order starting tomorrow, September 14th at 9:00AM EST. It’ll be available on Dell in the U.S. and PC World in the U.K.

Stay tuned as we provide additional details for the upcoming VR HMD.