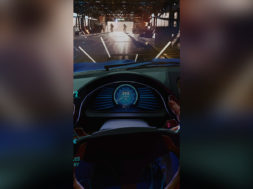 Defector is an upcoming new spy action VR game from Twisted Pixels (creators of Wilsons Heart) and Oculus Studios that’s ready to bring some new unique content to the platform. Being an exclusive title, the two teams have put a lot of work into this title to make it fresh and exciting for the Rift users.

At the start of the game you’ll be asked a series of questions that determines what kind of movement you’d like to use in the game. Whether it be teleportation or smooth locomotion, you will be given the option to choose your preference. In the Defector VR game, you will become a spy on a super secret mission to essentially save the Earth from evil people.

You will be given special equipment such as an earpiece to wear which allows you to stay in contact with your partner that feeds you valuable instructions and details. You will also be given smart contact lenses that provide an augmented reality like view that feeds information on a HUD like display, similar to the concepts you saw with the Google Glass.

In the trailer and gameplay you can see that you will be onboard a large luxurious aircraft where you must infiltrate and eliminate the target. Defector combines many unique aspects such as multiple scenario strategy where you can pick and choose the ways you’d like to complete a mission. On top of that, you will be going through a series of queues which includes hand and movement gestures to complete a task.

What I mean by that is you will have to raise your hand during a part of a mission where the henchmen frisk you down or hold your hand in a certain way to trigger a queue.

In Defector, you will have to overcome impossible odds and survive certain death scenarios. It’s a zero-sum world where facing danger head-on is a requirement, and success favors those who embrace it. Your mission in this exciting Oculus exclusive to defeat the enemy using advanced weapon, cutting-edge technology, and deceptive tactic in your arsenal.

Defector is set to release some time in 2018 and we are looking forward to playing this unique game in VR created by Twisted Pixel and Oculus Studios.

tags: defector vr game oculus studios secret agent twisted pixel
previous Catch The First Weekend Livestream Of Coachella 2018 In 180 VR Including Sets From Cardi B And Beyonce
next Linus Tech Tips Puts HTC Vive Pro On Blast For Its Overpricing And Many Other Issues
Related Posts