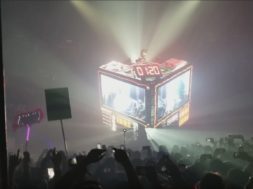 VRChat has been one of the hottest VR applications in recent months where strangers and friends gather in the virtual world to socialize. In fact, VRChat has been so popular that some of the most popular Twitch streamers have actually been livestreaming using the VR app.

VRChat has also been noticed by some of the biggest artists in the world such as Deadmau5. He actually partnered up with VRChat and Justin Roiland to ring in the New Years in style. Using the virtual platform, they recreated Rick and Morty and had Justin Roiland voice over a short New Years countdown skit.

In the video, you can see Rick and Morty appear on the infamous Deadmau5 cube where Rick bickers off about Deadmau5. Rick and Morty also mention the counter that seems to be counting down to midnight. Rick tries to turn off the timer thinking that it’s a bomb.

Haha 😉 thanks to my pals @JustinRoiland @brograph and @VRChatNet for helping me pull it off. Countdown was on point 🙂 https://t.co/EAsAVCFkrQ

Justin Roiland has been quite active in the VR scene with his most recent VR game called Accounting+ published through Crows Crows Crows and Squanch Games. We look forward to seeing more creative endeavors using VRChat and the virtual reality platform.