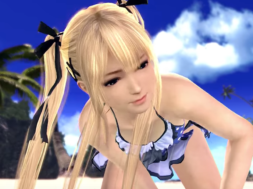 Dead or Alive was a game franchise famous for its unique characters, similar to Tekken. There were various characters to choose from with unique level designs. And with the popularity for its characters (the female ones), a side project was released called Dead or Alive Xtreme where gamers control female characters playing volleyball. That’s right, volleyball in undersized bikinis with oversized breasts. Team Ninja, the developers of the game, decided that they wanted to release a tribute to the game featuring the animated female characters.

For those that don’t own a copy of the game will have to pay around $13 – $15 US dollars for the DLC. VR Passport will be available to download within the game if you wish to do so. For those who’ve been waiting to play Marie Rose or Honoka in VR you’ll have the opportunity starting tomorrow.  Just remember, this is a video game.