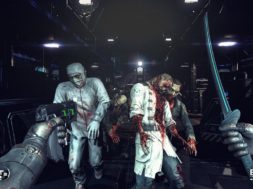 BadFly Interactive has recently announced the release of Dead Effect 2 VR, which is a standalone VR version of the acclaimed first person shooter, Dead Effect 2. This particular VR title is currently available on Steam Early Access for the HTC Vive and Oculus Rift.

Dead Effect 2 VR is set aboard a colony spaceship where things have gone disastrously wrong. Players awake from cryo-stasis to discover that a virus has broken out on the ship. All their crew mates have been turned into flesh-eating creatures who roam the corridors looking for their next meal. Determined to eliminate these space zombies, the player’s mission is to seize control of the monster-infested ship, uncover its dark secrets and make it out in one piece.

In Dead Effect 2 VR, players will have the option to pick from three different characters with their own unique skill sets and weaponry. Gunnar Davis specialises in heavy weaponry and explosives, Jane Frey is prolific with short-ranged weaponry, and Kay Rayner is a melee specialist, packing razor-sharp blades to slice and dice her enemies. Each character can be further customised with various armor parts and implants from dozens of different sets and passive skills.

Currently, the early access version of the game allows you to pick and choose from over a dozen different weapons which includes flamethrowers, shotguns, samurai swords, machine guns, grenades, and mines. BadFly Interactive has stated that there will be tons more to choose from in the near future. You’ll also have the ability to upgrade your characters and weapons.

BadFly Interactive said that the game will launch with 10 hours of single-player campaign content with 4 different game modes which are Biohazard, Survival, Lone Wolf and Infestation. In the future, you’ll be seeing PvP modes where 8 players battle it out aboard the ship. Dead Effect 2 VR has been recreated from the ground-up with VR users in mind.

You can find the game on Steam Early Access for $19.99 today. Make sure to give it a go.