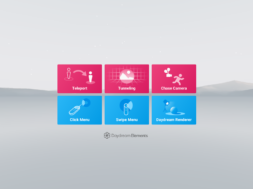 Daydream Elements by Google is a new, free app that serves as a guidebook, covering VR development basics. While those familiar with VR development would probably be disinterested in this new app, as it is so basic, it’s a great starting point for those unfamiliar with VR. The app showcases six examples of tips and tricks for VR development, complete with the pros and cons for their use.

According to Upload VR, “three of these [examples] are concerned with locomotion. One details teleportation, another showcases smooth movement with restricted peripheral vision, and another shows third-person gameplay. Interestingly examples of all three of these types of experiences have hit Daydream in the past few months. Teleportation can be seen in the VR port of Layers of Fear, while the excellent Eclipse uses smooth movement. Meanwhile both Lola and the Giant and Along Together both used a third-person camera that followed a main character.”

Menus and Virtual Controls: The Daydream controller only exposes two buttons to developers: the clickable touchpad, and the app button. For many developers, two discrete controls does not provide a rich enough set of commands for the games and applications that they would like to create. One solution is to present the user with virtual controls for the app’s command scheme.

The app also spells out all known issues, which you can find here.

This app is definitely for newcomers to VR, however since many people are not yet familiar with the space, it seems like a user-friendly platform that encourages people to try their hand at developing.