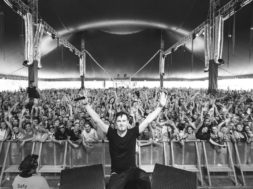 Darude is one of the most impactful artists to date in the music industry. At the fruitful age of 24, the Finish DJ named Ville Virtanen created a milestone hit single ‘Sandstorm,’ which has shape-shifted the EDM industry as a whole. Iconic producers such as Deadmau5 stated that he (Darude) and a “very select few others are responsible for the influx of electronic music into North America.” Deadmau5 also states that ‘Sandstorm’ is “what all the clubs were hitting on. That’s the first time (electronic music) became less ‘underground and cool.’ There wasn’t anything before that.”

I know that when I attend sporting events at professional sports arenas, ‘Sandstorm’ is played at least once to rile up the crowd. For those of you that have forgotten what the song sounds like, below is a quick reminder which will surely spark your memory.

VR & FUN got a chance to catch up with the famous EDM DJ Darude to talk about his endeavors and thoughts on the virtual reality industry.

SJ: What was your first experience in VR?

Darude: I watched Lawnmower Man when I was a kid… 😉 I’ve tried an early version of the Oculus headset and a while ago I got to try Valve’s demo room at their office in Seattle.

SJ: Did it make a personal impression on you (did it make you want to try a different VR experience)?

Darude: I’m definitely intrigued by VR, the possibilities are endless in both everyday practical things and entertainment.

SJ: Can you see VR being used in the music industry

SJ: How can VR make an impact in the music industry?

Darude: A good question. I’d say both more intimate fan interaction can be possible in VR and also reaching masses.

SJ: Will you be using or coming up with a VR experience of your own?

Darude: I’m thinking about it for sure. Starting from 360 video footage to augmented reality “trick” apps to actual VR I don’t think the jumps on the user end are too big these days, but as an artist the content has to be meaningful, useful, interesting and something that adds value, not just a trick.

SJ: Do you see VR/AR as the future of technology?

SJ: We’ve heard that you’ve tried out the WaveVR experience. How was it?

Darude: As all of my VR experiences so far, exhilarating, great, thought and idea provoking and left me wanting for more!

Darude: At the moment you best catch me playing live in the real world, though!

It’s quite amazing to hear how super famous artists such as Darude have gotten a chance to experience what VR is all about. Being involved in the VR industry, it’s always welcoming to see the ripples that VR is creating for outside industries such as music. The DJ believes that VR and AR applications can be used to create an intimate experience for music fans across the world. Darude also believes that creating quality experiences will be key instead of creating short meaningless experiences that feel more like a gimmick.

We’re looking forward to working with Darude in the future to present some of his amazing ideas and VR applications.