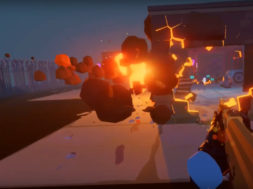 Crunch Element is a VR game that’s currently in the works and has finally met its Kickstarter campaign with a few days to spare.

Created by Blake Zonca and the Crunch Element Team, the game focuses around the mechanic of breaching into compounds using physics based explosives. Plan your raid, get into position, and execute.

Two charges, you decide. One to distract the guards, the other to crack an entry point to the compound. Your raid begins earlier than expected when you turn the corner and see one… a guard. Its weapon snaps towards you, but after two muffled thuds from the weapon of your own, drops to the ground.

No time to spare, one charge it is. You place the explosive on the wall and clack the detonator the instant you have an angle with your rifle. The shock wave from the explosion roars through the air and rips the open the wall, hurling debris inward. Gripping your weapon tightly, you enter the compound…

The game will focus on breaching the building and is a cornerstone mechanic to Crunch Element. Players will have to carefully place wall charges, throw grenades, and use peculiar weapons to blow holes in walls, ceilings, and floors to crack open entry points to compounds.

There will be a bunch of guns and weapons to choose from as this will be a dangerous assignment.

The game will provide unlimited raiding with compounds growing in size, difficulty, and loot amount as the player progresses, so enjoy the “peace” of the first few compounds while it lasts.

When the player dies, upgrades collected along the way are lost. These elements coupled with the currently integrated destruction and weapon mechanics are something that fans are very passionate about seeing, and fresh elements to VR.

Where the money will go

With over $10,000 raised, they plan to update these portions of the game prior to early-access launch.

The team is set on releasing Crunch Element some time in March of 2020 so there’s only a short time left until we will be able to test it out.