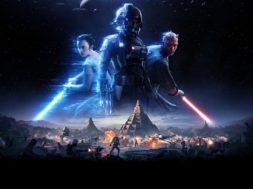 The famous Star Wars franchise put on a special treat for us last week celebrating its 40th year anniversary. George Lucas along with iconic stars from the Star Wars movies joined on stage to recap its amazing milestone. During the festivities the company announced a lot of updates and news about the Star Wars universe including the upcoming Star Wars Battlefront II game.

@fgandiya @sehurlburt @Wertle @CriterionGames Our most recent release was the VR mission for Star Wars Battlefront. Next up is something awesome in Battlefront II

While there weren’t any hints about this awesome thing they are working on, it’s quite exciting to hear that the company is back collaborating with EA and DICE on the next Star Wars game. Criterion Games might’ve been hired to create another wonderful VR experience for the upcoming game.

Star Wars: Battlefront II looks to have a storyline that’ll be based around the time right after the destruction of the Death Star. Included in the game will be iconic characters such as Darth Maul, Yoda, Rey, Kylo Ren, and more. Battlefront II is set to release on PlayStation 4, Xbox One and PC for November 17th, 2017.