This Couple Just Got Married In Zero Latency Virtual Reality 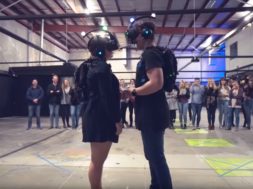 This Couple Just Got Married In Zero Latency Virtual Reality

Virtual reality has been a place for entertainment, education, and sight-seeing. But this couple takes it to a whole new level as Alex proposes to his long time girlfriend, Kelly in VR. Using Zero Latency’s game and platform, Alex was able to take Kelly to a virtually simulated world which she is all too familiar with.

At the beginning of the event, Kelly unknowingly believes that they are all there to play an action-packed game in Zero Latency. This high-octane environment provides a heart throbbing experience where you can actually move around untethered while playing in VR thanks to some ingenius technology.

As they make progress through the game, Kelly all of a sudden sees her screen turn blue with a message that reads “rebooting.” Then she is taken to a virtual replica of her grandmother’s home. While she’s exploring the space with Alex, their friends gather around her waiting for them to take off the headset. When they do, Alex gets down on his knees and asks Kelly if she would marry him.

While this isn’t officially the first proposal or marriage in VR, it certainly is the most creative one we’ve seen using the virtual space. The team was able to create a special replica in digital space of Kelly’s grandmothers house just for this event. If your thinking about proposing, you might want to consider what Alex did for Kelly.