Copter Assault VR Building Up To Be A GTA Like Game 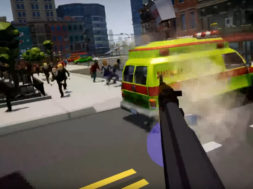 Copter Assault VR Building Up To Be A GTA Like Game

A lot of creative minded individuals are currently working on developing experiences that deliver great content and fun in VR. In particular, we noticed an indie dev, Star Reaper Studios, working on something quite interesting called Copter Assault VR.

This Work in progress VR game places you inside a helicopter where you reign rampage down onto the streets, much like GTA games. The demo video features an AK-47 where the user shoots the assault rifle at pedestrians for no apparent reason other than to cause chaos.

The video also show that you can pilot the helicopter around the streets to better position yourself. On a Reddit post, the developer asked for feedback about the featured content and what they can do to better the game.

“The combination of free roam with getting in a helicopter and going on rampages is actually shaping up pretty fun,” said Star Reaper Studio. “Combined with my inventory, climbing, and free movement (sorry those who get motion sick, but I wanted to satisfy what I felt was missing with VR which was freedom of movement) it’s starting to shape up decently.

I’m still not quite sure what to do with this game though in terms of gameplay loops or objectives. So I’m open to suggestions!”

Some suggested that they make the game more CSI oriented. The game currently has no particular direction so adding an element to solve crimes and catch bad guys would make sense. Others have suggested making the game a race with obstacle courses, rescue missions, delivering patients, and etc.

There was a Reddit user that stated that this game reminds them of the 1996 SimCopter game which places you inside a helicopter tasked with various missions throughout a city.

Let us know your thoughts on the game and what type of gameplay you’d like to see in Copter Assault VR.