Home VR Games This Is What ‘Contagion VR: Outbreak’ Is All About
VR Games
VR News
January 18, 2018 SJ Kim 0 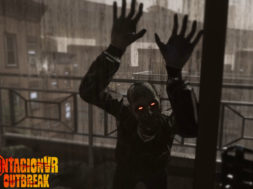 VR is home to some terrifying immersive experiences today that push the boundaries in gaming. Soon to be added on the list is the upcoming VR game called Contagion VR: Outbreak.

This game places you in a decrepit world where you must survive the horrors that has overcome society. You will assume the role of one of many characters featured in the game and experience their stories first hand. You will help mold them into who they eventually become and develop the story as you progress.

Users will explore highly detailed environments as you collect resources and test your abilities in surviving a zombie apocalypse.

Contagion VR: Outbreak was built from the ground up exclusively for VR. The game offers various modes where you can fight alone in the single player story and experience each characters past or team up and fight alongside your friends in the co-op based mode. The game will even allow PvP modes where you can fight against other players to claim king of the VR wasteland.

Contagion VR: Outbreak is still being tested but is available to demo today for free on Steam. The game is being developed by Monochrome Inc. who specializes in creating zombie themed games. Users who have access to the Oculus Rift or the HTC Vive can check out the experience and see what it’s like to live in a post-apocalyptic world where zombies roam freely.