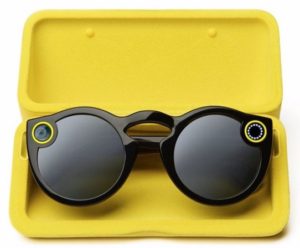 Spectacles will be able to record videos in 115 degrees that can be watched in full screen like it currently is on the app. The video will be stored on the sunglasses itself which can be wirelessly transferred to a smart phone through Wifi and Bluetooth. It can then be edited and shared on Snap Inc. The video sharing company announced that that the batteries will last around a day and can be fully recharged from the portable charging case. The case itself can store up to 4 fully chargeable amount of battery for the Spectacles.

Above is the image of Snap Inc. CEO, Evan Spiegel, with a pair of Spectacles. The cameras are mounted on the sides of the lenses where the arm and frame meet.

It can be speculated that Snap Inc. has purchased the naming rights from SpectacleVR.

Snapchat looks to create a more immersed application between the user and the platform through the Spectacles.