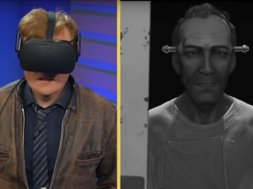 Conan O’Brien is one of the main late night hosts who has a lot of entertaining segments. One in particular we enjoy is called “Clueless Gamer” where he tries out various new games and reacts to them. He is usually brutally honest with his segments which turns out to be quite entertaining. Last night, the famous late night comedian got his hands on Wilson’s Heart for Oculus Rift.

In the video you can see that Conan is relatively new to operating the Oculus Rift and states that “All VR is going to lead to virtual reality sex. That’s the point of VR (clearly joking).” When he steps into Robert’s world he becomes this 63 year old man stuck in a hospital having to find his way through.

While Conan’s in the hospital, he explores the unfamiliar place to find various items and objectives. Being the curious person that he is, Conan starts to mess around with anything he can get his hands on. Along the way he finds a bathtub full of water and a cork keeping the water inside. Without hesitation he unplugs the cork to find that he has unleashed a great, scary tentacled monster.

Conan becomes frightened for a second but quickly gets over the fact that a monster just crawled out of the drain. To continue on in his adventures Conan picks up a box that he’s supposed to throw at the monster. But he fails to get it there due to technical difficulties on the controller. Ultimately though (after a few attempts), Conan was able to sling the box into the monster’s mouth to electrocute it to death.

While Conan has a difficult time coping with the VR world in Robert Wilson’s body, it’s quite entertaining to see him trying the Oculus Rift for the first time on his late night show. Most of the consumer market is unaware of quality VR games such as Wilson’s Heart. Through his segment, many of his fans were able to see what a quality VR game looks like.

For those of you interested in trying out Wilson’s Heart, it’s available today on Oculus Home for $39.99. We hope you have a chance to experience this VR game yourself and see if you can do better than Conan did.