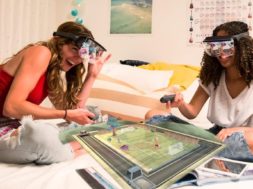 Currently, the AR market is in a strange flux where there is no clear winner. Rather, companies in the industry such as Microsoft are slowing down their process in development of their hardware. Other companies such as Cast AR has had the misfortune of shutting down completely. But a new startup company called Mira looks to fill the gap with their cost effective AR solution called Prism.

This new device is mobile, untethered, and affordable. In a similar concept to Google Daydream and Samsung Gear VR, it draws its performance and power through a mobile device. Mira will be selling their Prism AR headset starting at $99.

In the trailer above you can see how a smartphone is clipped into place above the headset. The phone reflects digital images onto the lenses in front of your eyes which allows you to see in AR. There is a front facing camera on the headset as well that takes care of some limited positional tracking. This allows you to have some movement while using the device.

While the concept is simple, it was enough to draw in $1.5 million in seed funding from the likes of Sequoia Capital, Troy Capital Partners, S-Cubed Capital, Salesforce CEO Marc Benioff, global will.i.am, Jaunt VR founder Jens Christensen, and more.

Instead of the hand-gestures you usually see with Microsoft Hololens, Prism comes equipped with a hand held controller for any interactive movement.

Ben Taft and Matt Stern, the two co-founders of Mira, built this headset with mass-adoption in mind. They believe that AR should be accessible to anyone and have built Prism for that very purpose. While it may not compare to a $3,000 Microsoft Hololens or a $15,000 DAQRI Helmet, it provides an entry-point for daily consumers to experience what AR is all about.

The biggest challenge for the company will be the content aspect which is currently one of the cruxes in the VR industry. What are your thoughts about the Mira Prism AR headset?