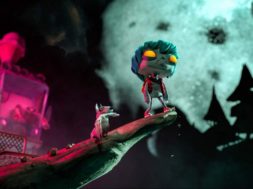 Colin Ferrell has recently become the newest addition to the VR community as he becomes the main narrator to a brand new VR series called Gloomy Eyes premiering at this year’s Sundance Film Festival.

Directed by Jorge Tereso and Fernando Maldonado, Gloomy Eyes will be a 3 part series.

The story will take place in 1983 on a cold night in Woodland City. Being a zombie is against the law. The undead have been around for almost a decade now, but peaceful coexistence with the “normal” people continues to fail. They hide in the forest, away from the dangerous zombie hunters. Nights are calm and quiet, but Gloomy still tries to stay out of sight. Hunters are a real threat, but this zombie is hiding from something else as well…Truth is, he doesn’t feel too comfortable around others of his kind. But really, Gloomy not completely like other zombies. He has access to things we don’t see or understand. Nature knows he’s special.

“The world we imagined in Gloomy Eyes shows the darkest side of humanity. But we balance it with the hope that two little kids bring in their eyes. To love what’s different will bring harmony once again,” Tereso and Maldonado said.

Gloomy Eyes will be premiering at the New Frontier section of Sundance Film Festival along with many other great VR films and experiences.