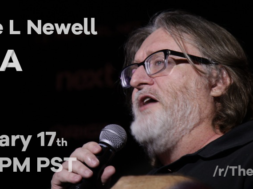 Co-founder and president at Valve, Gabe Newell has agreed to host an ask me anything (AMA) session on the subreddit r/The_Gaben. During these sessions, redditors are free to ask relevant questions for the host. Then the host replies back with an answer or statement. The AMA session with Gabe Newell will start tomorrow, January 17th at 3PM PST. The official announcement was made yesterday through a post on the particular subreddit.

Valve played a vital role in the Vive VR headset making it on to the market last year. The two companies devised a plan where Steam (Online gaming and experience store) was the official marketplace for Vive VR content. Users would be required to log in to the Steam store in order to purchase, play and experience the latest virtual reality content. But that has changed ever since the launch of Viveport.

Valve also served as a giant video game developer company with titles such as Dota, Counter-Strike, Team Fortress, and Half-Life. There were talks early last year about developing a AAA title for VR but things have slowed down ever since. We imagine that this will be a hot topic to ask Gabe during the live questionnaire tomorrow. We’ll probably also see redditors ask questions about Half Life 3 and other sequels to the hit games. If you have a question about Valve and it’s many projects, be sure to tune in tomorrow at 3 PM PST on the r/The_Gaben subreddit.