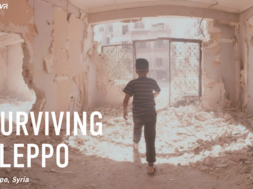 CNN is been a popular source for political and agenda news that oversees a vast audience. They have a global presence with editors located around the world. Today, they’ve announced their expansion of their editorial company with the addition of a new division called CNNVR.

CNNVR will be documenting “worldy” experiences in VR by bringing the new age audience a new immersive way to view content. Storytelling can now be controlled by the user with a simple turn of the head using a VR headset. CNN has seen the potential and is now following along in the footsteps of other major news publications that are releasing these immersive VR experiences.

With CNN having such a global presence, they’ll be able to document stories into VR format and show it publicly to the world. Currently, there are four stories available by the new CNNVR division.

The first VR experience is called Toro Bravo where you visit Pamplona, Spain during a festive event.

Every year, thousands of amateur daredevils flock to Pamplona in the hopes of coming face to face with Toro Bravo – the Spanish Fighting Bull. Get closer than ever to this intense, and controversial, spectacle.

CNNVR provides a vivid VR quality in this experience which lasts a short 5:29 minutes. It’s quite exciting to see such an event in a VR format.

The second VR experience is called Surviving Allepo. You’ll be joining one family’s struggle to survive in the city of Aleppo in Syria, where it’s been bombarded in destruction and war.

Aleppo has become a symbol of Syria’s civil war and the destruction left in its wake. See how one family is trying to rebuild in the rubble.

It’s a surreal experience to see what the civil war has done to this once, beautiful city. You can turn and see destruction all around you.

The third VR experience is called Carnivore Sanctuary where you’ll come face to face with large carnivorous animals such as lions, bears, and wolves.

Abused, neglected, discarded – that’s how many of these animals began their lives. Now these rescued lions, tigers, bears, and leopards roam the grasslands of The Wild Animal Sanctuary.

While this 360 VR video is quite short, it provides informative descriptions about the sanctuary and its mission.

The last VR experience is called Welcome to CNNVR. It’s a short informative video into the team’s goal in providing informative, descriptive news in a VR format.

We’ve always brought you the news. Now, we’re taking you inside it.

People will be able to see VR content developed by CNNVR on headsets such as Samsung Gear VR, Google Daydream, and Oculus Rift.

You’ll also be able to see the 360 VR videos on traditional desktops through compatible web browsers. CNNVR has plans on live-streaming 360 content in the near future. This is quite a strategic and forward-thinking move in part by CNN.