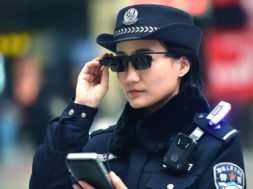 The Chinese police force seems to be getting an upgrade as they are now armed with facial recognition smart glasses.

China’s police have been testing out ways in which they can create better surveillance to detect suspects and criminals in populated areas. Now they have the means to do so with the new smart glasses. And this is ahead of the big Chinese holiday called the The Chinese Lunar New Year taking place on February 16. During this holiday, hundreds of millions (if not billions) of Chinese people will be traveling across the country to get together with their family. As large groups of human move about in congested areas, the new smart glasses will be able to detect faces out from the crowd.

As WSJ mentions, the smart glasses have already helped railway police at Zhengzhou’s East Railway Station capture seven suspects wanted in connection with major criminal cases. On top of that, 26 others were arrested for using other people’s identities.

The smart glasses itself resembles the Google Glass. The device has a camera attached to one side of the frame with a display right next to it that can provide visual support.

“By making wearable glasses, with AI [artificial intelligence] on the front end, you get instant and accurate feedback,” Mr. Wu said. “You can decide right away what the next interaction is going to be.”

LLVision Technology says, the device has been able to identify individuals in a database of 10,000 suspects in as little as 100 milliseconds. However, environmental noise can decrease accuracy. China is already known as a police state with heavy surveillance and monitoring. This technology will take it a step further.