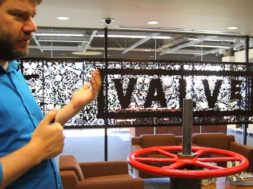 It was announced today that Chet Faliszek, writer and VR evangelist, is leaving Valve after 12 years. Valve is the company that created SteamVR’s platform.

Faliszek assured gameindustry.biz that his decision to leave had no hard feelings or ill will behind it. “It was nothing exciting or drama filled,” he wrote of his departure. “I worked there 12 years, shipped a bunch of great games and some amazing hardware and wanted to change things up. There’s no news on what’s next etc, I will let you know when that happens.”

Known as one of VR industry’s most talented writer’s, Faliszek’s passion for storytelling comes through in his work. According to gameindustry.biz, “with a CV which includes two Half Life episodes, two Portal games and both Left 4 Deads…and working with his long time friend Eric Wolpaw, with whom he ran hugely influential gaming site Old Man Murray, and author Mark Laidlaw, (and later Jay Pinkerton and Ted Kosmatka) Faliszek and his contemporaries defined Valve’s incredible story writing for its formative years.”

Faliszek’s decision to leave was preceded by both Wolpaw and Laidlaw, with Wolpaw leaving this February, and Laidlaw departing in 2016. Faliszek’s presence in the VR world and his reputation for regular trade show attendance has made him a familiar face in the industry. Although not too much is known right now, as this is breaking news, we are keen to find out where he will be going and what he will be doing in the near future.