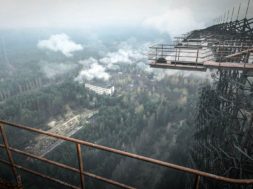 The Farm 51 has just released Chernobyl VR Project on PSVR which takes you behind the scenes of the nuclear fallout in a small city located in Ukraine. Chernobyl accident was the result of a nuclear power plant that had some mishaps which led to the leak of large amounts of radiation. Today, the city is a ghost town that’s fueled by scary ghost stories.

The VR experience itself will take you on a virtual tour to the ghost town of Pripyat and Chernobyl Power Plant that gives the opportunity to visit the radiated area and get to know its history in VR.

The Chernobyl VR Project combines a video game element with educational and movie narrative experiences. It is the very first virtual tour around the Chernobyl and Pripyat area, compatible with a VR headset.

Chernobyl VR Project was first released on Steam for HTC Vive and Oculus Rift and it garners mixed reviews today for its gameplay and overall experience.

In the trailer, you can see the various locations you can visit throughout the city which includes the Chernobyl power plant, the tall towers, and other various locations. There’s also stories you can hear from the exclusion zone inhabitants.

The Chernobyl VR project was created through the combination of multiple 360 movies, panoramas, 3D scanning of locations and buildings, 360 photography, stereoscopic videos, integrated CGI and much more.

The Farm 51 focused on conveying what it’s like to actually be in the nuclear zone. As a result, you’ll be transported back to 26th April 1986 to witness stories of the citizens and workers of Chernobyl.

You can download Chernobyl VR project today on the PlayStation store for €9.99. This is for the European PlayStation VR owners. Let us know your thoughts on the experience and what it’s like to visit the haunted city of Pripyat. Make sure to check out other PlayStation VR games.