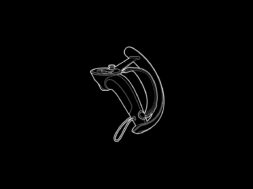 The Knuckles now features thumbsticks and many other features that are quite different from the EV1.3.

Pick up and squish

The thumbstick is a welcomed feature that many developers have reached out about. Now it is featured on the new iteration. The track button on the EV2 is a nother new input.

Beneath the track button is a force sensor which can detect a range of force from light touch to a full press. This allows a lot more capabilities in game and experiences for dynamic performance.

Cap sense now features auto-calibration and much higher fidelity finger tracking. All of the buttons and thumbstick have cap sense capabilities which allows for more tracking throughout the controller.

The new force sensors now allow for a much wider range of inputs. This includes:

The Knuckles EV2 looks to have a lot of improvements suggested by feedback from the developer community.