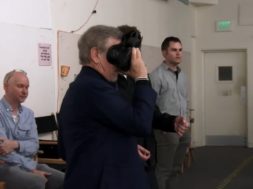 Ready Player One seems to be a success in the box office as it has crossed the barrier of $100 million during its opening weekend. Steven Spielberg, along with many talented team members did a great job in capturing the magic of the OASIS and the virtual wonderland.

In a tweet shared today by HTC Vive we can see how the magic came alive using today’s existing virtual reality headsets. This includes the HTC Vive where Steven Spielberg and company used the HMD to game plan and imagine this virtual world to existence.

As Spielberg states, he was able to see his avatar and conceptualize the space he was working in. The studio was able to design the shots and the sets using the platform which is rather exciting. Make sure to check out the video above to fully see how Spielberg’s team brought Ready Player One to life.