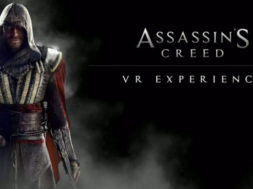 Assassin’s Creed is a series of games that’s ousted the test of time with a unique storyline. It has captured the heart of millions around the world and threaded in the idea of time travelling through a VR like system called the Animus. Throughout the games, you’ll find that the Assassin’s are always in a battle against the Templars. And with such a great reception to the game, Ubisoft Motion Pictures in partnership with Regency Enterprises has produced a live action movie to the popular game (20th Century Fox will be the distributors).

The movie will star Michael Fassbender who plays the role of Callum Lynch. “Through a revolutionary technology that unlocks his genetic memories, Callum Lynch experiences the adventures of his ancestor, Aguilar, in 15th Century Spain. Callum discovers he is descended from a mysterious secret society, the Assassins, and amasses incredible knowledge and skills to take on the oppressive and powerful Templar organization in the present day.” – 20th Century Fox 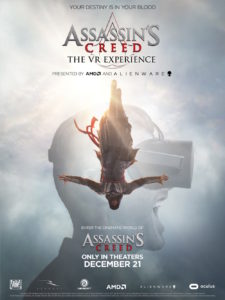 The movie had a budget of $130,000,000.00 which puts it up there with the top blockbusters. And to further solidify the identity of the franchise, the joint companies have launched a behind the scenes 360 VR experience of the Assassin’s Creed movie on the Oculus Rift and the Samsung Gear VR. Through the 2 devices, you’ll be able to catch exclusive snippets and actions scenes directly from the movie. They’ll also be releasing the 360 video on their official Facebook page today.

Ubisoft, in partnership with AMD and Alienware will also be demoing the experience at select AMC theatres in LA, SF, Austin and NYC. They’ll be using the Oculus Rift headset in combination of Alienware computers and Radeon GPUs. The experience will be available for a period of time between December 2nd through January 1st. The movie will premiere starting December 21st.