Check Out The New Trailer For KryptCrawler 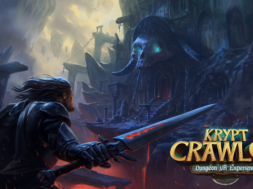 Check Out The New Trailer For KryptCrawler

Headup Games has just released the official trailer to their upcoming first person dungeon crawler VR game, KryptCrawler for the Oculus Rift and Samsung Gear VR. Users will be descending into the unknown to explore the perilous depth of the sinister tombs and crypts you are thrown into. You will be armed with nothing but a map and your wits at the beginning of the trials.

Players will have to hunt down powerful weapons and wield mighty artifacts to fight off the undead reamins of the warriors who have come to the dungeons before you. Brace yourself as you’ll be fending off deadly scorpions, hungry spiders, and many other creatures that lurk in the depths.

KryptCrawler will bring about a combination of turn based old school gameplay and real time combat and trap evasion unprecedented in its genre. The VR game will combine the immersion of modern VR technology with dungeon exploring experiences.

In the trailer you can see how the dungeon spreads far and wide with skeleton warriors guarding corridors and traps that you must solve. It also reveals how you’ll be playing in first person with locomotion movement. You’ll be able to wield a shield on one hand and a sword on the other.

Headup Games has promised that KryptCrawler will include hours of content where you will fight, solve puzzles, and explore through 10 giant story levels that unveil an ancient secret which lies hidden deep inside the crypt.

There is no word yet on when the game will be available so stay tuned for more information!