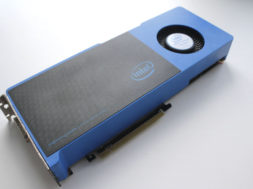 Intel is mostly known for their great line of CPU/processors that’s able to deliver great performance for many PC users. With awesome products such as the i5 and i7 processors, you are able to enjoy quality VR experiences and gaming. But recently, it came to our attention that Intel – at one point – was working on a GPU of their own.

Yes, a graphics card by Intel is indeed real. While it has never been released to the public, you can see in the video below by Linus Tech Tips that the company once worked on GPU called the Intel Larrabee. Linus was able to get his hands on a prototype for us to see its capabilities.

Not only is Intel Larrabee a GPU but it also serves as a CPU with up to 61 quad-thredded cores running a normal operation system. But there are various reasons why the Larrabee never made it into production.

One of the key issues was that it was only able to deliver a quarter of a performance in games when compared to normal GPUs made by companies such as Nvidia. In addition, the Larrabee was not a practical business decision for Intel.

Intel required two separate teams while building the product and couldn’t see the value in further developing this technology. As mentioned by Linus, Larrabee at one point had 4 different teams on the product trying to figure out different ideas and solutions.

They also had their internal teams compete for the overall idea of what the Larrabee would be. Unfortunately, the GPU that Linus had wouldn’t properly boot up for us to see which was unfortunate to see. Intel has made no indications on further developing this one of a kind product and we should not expect to see it in the near future.

tags: i5 i7 intel intel gpu intel larrabee
previous Netflix Original ANON Shows How Powerful Augmented Reality Technology Can Be
next You Can Currently Purchase A GTX 1080 Graphics Card For $579
Related Posts