Check Out The Graphics In The First Class VR 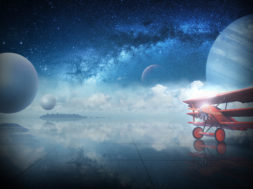 Check Out The Graphics In The First Class VR

The First Class VR is an upcoming VR title by Zodiac Interactive that allows users to enjoy cinematic experience like never before.

Based around aviation history, the journey will take you through the first flight at Kitty hawk with the Wright brothers, all the way to Elon Musk’s SpaceX program today. The First Class VR will also be showing you a glimpse of what the future might hold for us as far as aviation goes.

“We are so happy to announce that The First Class VR will be released on December 5th. We wanted to push the envelope with the future of interactive cinematic storytelling and I think The First Class VR does just that.” Said An Pu, Lead Creative Producer at Light & Digital Technology. “The story you will experience is inspired by the Hugo Awards Best Novel Winner the “Three-Body Problem” by Cixin Liu. We feel very honored that the author Cixin Liu played the game and gave it his blessing.”

In the trailer above you can see some of the awesome graphics that was used in the experience. Developed on Unreal Engine, you’ll see some truly stunning views that can only be experienced in VR.