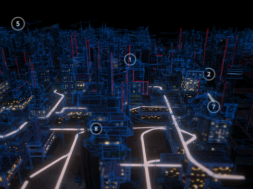 3D VR artwork is a relatively new thing with many artists experimenting on the new platform. This week on March 5, 2017, we present to you some of the coolest 3D VR artwork we’ve found by various artists using Google Tilt Brush.

The first 3D VR artwork we really enjoyed was called “Virtual City” by factoryfifteen. In this particular piece you can see the amazing depth and detail that was created on the 3D canvas. factoryfifteen has inserted various camera angles to display this amazing city in different views.

Virtual Cities started as an exhibition art piece with the aim of combining physical space with virtual reality. We assembled foam blocks within a room, mimicking an abstract simplified cityscape, which was then painted over in virtual reality using tilt brush. The result is a piece of art which attempts to transcend media. Visitors can put on the headset and navigate through the real space, but see an augmented version of the block layout.

The “Legend of Zelda – Temple Ruins” re-creation by Jeffwang fulfills the fantasy of creating your own Zelda world. in this particular 3D VR artwork, you can see how the virtual landscape has rooted into the stair steps leading up to a relic of some sort. Jeffwang did a great job in creating this Tilt Brush artwork considering this was his “First Tiltbrush creation.”

Tilt Brush can sometimes be used to create creatures of imagination. And that’s what DannyBittman did with his recent artwork called “Forest Crab.” This is a creative resemblance of a crab with much more intricate detail. The pincers on the legs look like snakes with eyes and teeth drawn on them. His mouth is entangled with roots and clever designs. His eyes are popping out at the top with what appears to be a tree growing in between. It’s quite the creative 3D VR artwork form this artist.

Elizabeth Edwards has managed to pull off the first Oculus Tilt Brush artwork to be featured on VR & FUN with “Starfighter.” This adeptly designed piece shows how you can create defined artwork in the 3D space. With intricate, sharp edges, it qualifies as a design made for the future.

Juliusprod has created a 3D VR artwork of wonder with “Home Tilt Home.” In this 3D design, you can literally enter the home from any angle and see the details this particular artist has put into the project. Every room has a reason for belonging with home furnishing. From the kitchen to the bedroom, everything is handcrafted by the artist. Zoom in and see for yourself.