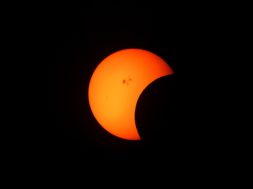 The Solar Eclipse was one of the greatest natural phenomenons to take place in the year 2017. People in the U.S. got to see the eclipse in totality and witness the moon blanket the world in darkness for a few brief moments. And while this phenomenon only took place yesterday, it already feels like it’s been an eternity since we last witnessed it.

Fortunately for us, Time Inc. was able to capture the rare Solar Eclipse in 360 which allows us to relive this intimate moment. Taking place in Casper Wyoming, the immersive video takes us on a hill top where we witness the shadows of the moon cover the area with darkness.

In the 360 video you can see a small black box with a clock that counts down the time until totality of the Solar Eclipse. If you look around you can see how the world hues in color as we get closer to zero. Over the horizon, you can also see the warm colors come alive as if we were witnessing a sunset.

The 360 Solar Eclipse video is only 4:30 in length so if you have some time to spare, we encourage you to check this video out and see how technology was able to capture this powerful moment.

If you aren’t living in the U.S. you can also see how the Solar Eclipse would look in your neighborhood using the Google Earth VR app which is available for free today.