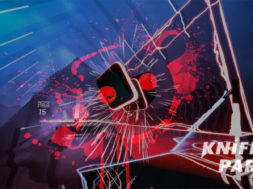 You thought “Through The Fire And Flames” by Dragonforce was hard? Well, take a look at Centipede by Knife Party on Beat Saber.

The level was created by purphoros and features some of the hardest and most challenging block sequences we’ve ever seen on Beat Saber. And while it can look unpatterned to the untrained eyes, it actually makes sense and looks rather fun.

The level itself is only 2:21 minutes long but it features 594 notes and 32 obstacles. As you can see in the video, there is a huge chunk of it where you won’t have a breather between notes. Rather, you will have to be flailing throughout most of the song. Knife Party has always been a dynamic duo within the EDM scene and it’s refreshing to hear this song again in mainstream.

For those of you anxious to upload and chart your own songs on Beat Saber, you can download the mods today for free. And if you already have the mod downloaded, you can simply download the song chart here. Hyperbolic Magnetism, the creators of Beat Saber, have still yet to announce their alfa mods for the early access game.

Be warned, this will be harder than it looks, and it looks pretty dang hard.