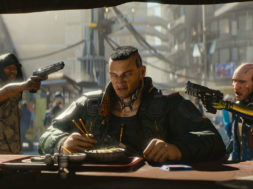 CD Projekt Red, creators of the Witcher franchise, has quietly been working on a game called Cyberpunk 77 for some years now. And while we haven’t heard much news about the development of the game, CD Projekt Red has just released a new trailer for the game in time for E3.

Cyberpunk 2077 is a narrative-driven, open world RPG set in the most vibrant and dangerous metropolis of the future — Night City. You play as V, a hired gun on the rise, who just got their first serious contract.

In a world of cyber enhanced street warriors, tech-savvy netrunners and corporate life-hackers, today is your first step to becoming an urban legend. Cyberpunk 2077 is set in the same universe as Mike Pondsmith’s classic pen & paper RPG system, Cyberpunk 2020.

In the trailer above you can see that the story will be revolving around a dystopian society where the city is in an anarchic state. The graphics of course look amazing and the story itself looks quite compelling.

There are no announcements about when the game will be available but it seems like CD Projekt Red is getting quite close to release. More to come at E3 so stay tuned.

tags: cd projekt red cyberpunk 2077 e3
previous Valve Is Opening Up Their Steam Marketplace And Allowing 'Everything' As Long As Its Not Illegal
next Catch The Bethesda E3 Showcase LIVE
Related Posts