Catch The First Live 360 Video On Facebook With NatGEO 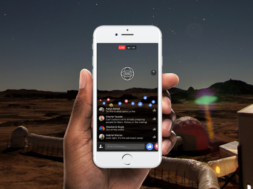 Catch The First Live 360 Video On Facebook With NatGEO

Live video feeds on Facebook have been getting a lot of attention lately as it provides a way to deliver breaking news quickly to a large audience. People have the ability to hop on Facebook and see live videos of their friends or media stations.

360 videos have also been getting popular as it provides an intuitive way to interact with digital content. You can control the direction of a video and see in any angle from the source. 360 videos can also be applied to VR technology to provide a more immersive experience. So Facebook has formulated a plan to merge the 2 new mediums together to deliver a live 360 video feed on Facebook.

Tomorrow, NatGEO will be hosting the very first live 360 video feed on the social platform. The feed will start at 12PM PST on their Facebook page where you’ll will witness scientists exit out of an isolation chamber they were living in for 80 days at Utah’s Mars Desert Research Station. It’ll be an exciting event as these scientists explain new findings and the gravity of their studies from living in a Mars like environment.

Facebook plans to roll out the live 360 video feed to the public some time next year. They have stated their recommended 360 cameras to use for the platform next year. “we recommend using a Nokia Ozo or Freedom360 Broadcaster rig with Vahana VR for high quality experiences, or the Giroptic iO, Insta360 Nano or Ricoh Theta S for less produced moments.”

Other social media platforms already provide this or are planning to do so soon. On YouTube, you can broadcast live in 360 with the use of an encoder software. Twitter is TDB and so is Snapchat. But there is news of Instagram (Facebook owned company) not being too far behind in the development.

So if you have some time tomorrow around 12PM PST/3PM EST, visit NatGEO’s Facebook page to catch the very first live 360 video on the social platform.