Home 360 Video The Cast Of It’s Always Sunny In Philadelphia Take It To The Next Level With A Virtual Reality Experience
360 Video
VR News
February 15, 2017 SJ Kim 1 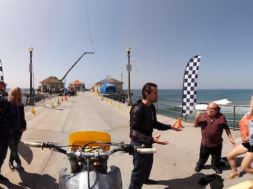 It’s Always Sunny In Philadelphia is returning to television tonight (Premiering on Wednesday, February 15, at 20 PM ET/PT on FXX) with an all-new episode called “PTSDee.” The episode will take place after finding out Dee’s a male stripper’s “rock bottom.” Dee goes on a mission to prove she’s the best thing that ever happened to him. Dennis takes over for the stripper with the help of his bag boy, Charlie. Meanwhile, Mac and Frank get sucked into a VR war game that causes Mac to develop his own case of PTSD. The episode is written by Charlie Day, Glenn Howerton and Rob McElhenney while directed by Jamie Babbit.

And to kick off the 12th season of It’s Always Sunny In Philadelphia, the cast and crew have partnered up with Jaunt to release a comedic VR experience called “Project Badass.” It’s a four-minute VR episode where you hop on the back of Mac’s motorcycle and go off a ramp into the Atlantic Ocean. And as always with the Sunny crew, they find themselves in a quirky scenario. But this time, you are a victim to their flawed plan. At the end of the VR experience, you’ll find yourself in a bit of pinch.