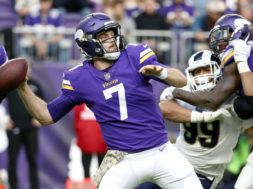 Update: Minnesota Vikings win against the New Orleans Saints in the playoffs and are headed to the NFC Championship game.

Case Keenum had an advantage over many other quarterbacks this year due to virtual reality. Or… so we think.

Keenum has been a prolific quarterback this year who led his team to a 13 – 3 record in the 2017 – 2018 season. He put up some great stats throwing over 3,547 yards with 22 Touchdowns and recorded a QB Rating of 98.3. If those aren’t impressive numbers for you, we can provide some more.

Keenum’s QBR was 59 when under pressure which was the highest in the NFL this season. He also recorded a 88 QBR when facing a blitz according to ESPN Stats & Information Research. This means that he acted cool under pressure and was able to face the adversity that was oncoming.

So how was Keenum able to record these numbers and statistics? Well, he’s had more reps than many other NFL quarterbacks this season through the VR platform using STRIVR’s technology. Currently, a select group of teams and quarterbacks are utilizing their technology to improve and enhance an athlete’s performance such as New England Patriot’s Tom Brady and the Pittsburgh Steelers. These are two of the top teams in the NFL.

According to STRIVR, Keenum has viewed 2,647 plays through the virtual reality platform. As a result he has run through this season’s plays a lot more and has been able to mentally prepare himself through the course of this season.

“The tendency for a quarterback against the blitz is to speed up when he sees the blitz coming when, in reality, he needs to slow down,” said Derek Belch, co-founder and CEO of STRIVR to ESPN. “I know it’s only fractions of a second. He needs to say, ‘Where do I need to go? What do I need to do to not make a hurried decision?’ I think seeing these reps again and again in VR helps these guys do that.

This season, Keenum ran through practice and then hopped into the STRIVR platform to get in a few more virtual reps. While we can’t say for a fact that it helped him win more games, it definitely did help Keenum stay cool under pressure through repetition and simulating moments under pressure using VR technology.