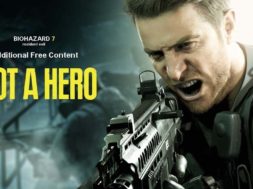 Resident Evil 7: Biohazard has been the biggest VR game so far on PlayStation VR with over 200,000 people who have played the game. And with high-demand, Capcom has decided to release a DLC which is playable in VR called ‘Not A Hero.’

They released the first trailer back in September and now have followed up with the second trailer showing even more content and the remanence of ZOE.

Players can gain access to Not a Hero DLC through their Resident Evil 7 season pass or purchase it separately for $14.99. Capcom has stated that we’ll be in for a treat where we finally learn about Zoe Baker’s fate and be introduced to a new swamp-filled area.

Capcom has confirmed that it’ll be releasing Resident Evil 7’s Not A Hero DLC and Gold Edition on December 12th in the US and European markets. The Gold Edition will feature “Banned Footage” content and also the “End of Zoe” content which shares the story of Zoe Baker.

Capcom has licensed Resident Evil 7 to Sony’s device for one year. It’s expected to be released on PC for the Oculus Rift and HTC Vive in 2018. The game has been superb on the console based VR headset so we’re ecstatic to see how it’ll look on the PC powered VR headsets.