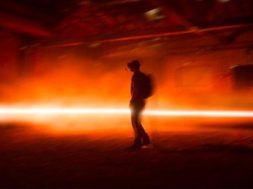 “Carne y Arena” is one of the hardest tickets to get at the Cannes Film Festival. Located approximately 15 minutes from the festival’s center in an airplane hangar, viewers are shuttled in specially for the experience. The visual art installation, created by Oscar award winner Alejandro Inarritu, allows those experiencing the exhibit to walk in the shoes of Mexican immigrants struggling to cross the United States/Mexico boarder.

Inarritu, filmmaker of “Birdman” and “The Revenant” (both Oscar winners) has been working on the exhibit for four years. Inarritu worked with his regular cinematographer, Emmanuel “Chivo” Lubezki. The two are known for testing the boundaries of cinematic powers of immersion.

Upon arrival to the exhibition, participants step into a faux border control holding cell where they must remove their shoes and socks as if they are truly being detained. The floor is littered with the shoes and socks of other “immigrants” adding a sense of loneliness and abandonment. A whirr of unseen machinery, perhaps a rattly air conditioning unit, makes for some nervy background noise. After an uncomfortable waiting period, an alarm sounds and the participant is taken into a dark room with a sand floor, and fitted with a VR headset, headphones and a backpack.

“The highest technology with the most beautiful human beings is a very powerful combination,” Inarritu said in an interview. “The experience of working with the immigrants was the most inspiring and rewarding (part) of all these years that I have devoted myself to this project.

The seven-minute VR experience drops the participant directly into a twilight scene where he or she will join a ragged band of migrants crossing the overwhelmingly expansive desert. The experience also features testimonies from immigrants who participated in the project. The VR piece recreates an approximation of their own experiences, some even wearing the clothes they wore then.

“I had to do a lot of travel and a lot research with border patrol officers and a lot of immigrants from Mexico and Central America,” said Inarritu. “And the stories I heard and the situation of these people — which is not even close to what it is now, and it was already tough — they haunted me.”

The exhibit was set to officially premiere next month in Milan at Fondazione Prada before appearing at the Los Angeles County Museum of Art and the Tlatelolco museum in Mexico City. The Cannes exhibition was a bit of a surprise, as Artistic Director Thierry Fremaux asked Inarritu if he’d considering bringing the exhibition the the film festival after he fell in love with its preview. Cannes runs May 17-28 of this year.