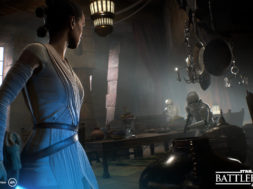 Star Wars: Battlefront 2 is currently one of the most hyped games featuring new weapons and characters. Developed by DICE, the game throws you into the familiar fantasy world where you’ll be able to fight alongside the rebels or the empire. While the game isn’t officially available in VR, you can now use VorpX to play the game on the HTC Vive or Oculus Rift.

You may think that the gameplay would be terrible on the VR headset but many people think otherwise. For instance, a YouTuber by the name of Nathie released a video which features him playing Star Wars: Battlefront 2 in VR and he seems to really enjoy it without feeling nauseous.

Tip: Make sure to run the game in a borderless window before following this guide

1. You must first download VorpX
2. Launch VorpX
3. Right click the exe. and select configure VorpX
4. In the configuration menu go to local profiles and search for Battlefield Hardline.
5. Select it and when ready hit apply & close

6. You must launch Origin
7. Go to application settings within the Origin client. Then choose the Origin In-Game tab and disable In-Game overlay via the checkbox. You must disable Origin’s in-game overlay otherwise it will mess with VorpX while playing Star Wars: Battlefront 2 in VR.

8. Launch Star Wars: Battlefront 2
9. Hit the delete key and go to main settings, turn Zbuffer on and max depth.
10. Next up go to display settings here you disable direct mode fluidsync. This will increase your framerate. If your fps stays low try alt+tabbing in and out of the game.
11. Close the VorpX menu by pressing delete again.
12. Go to the In-Game options and make sure you max out the field of view (95-109)
13. After following these steps the game should be ready to play in VR

There will soon be a Star Wars AR game launching so make sure to keep your eyes open as you’ll be able to digitally battle Kylo Ren.