You Can Now Use The Retro Nintendo Power Gloves For VR 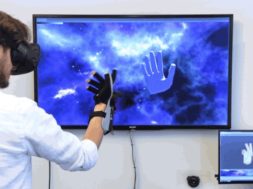 You Can Now Use The Retro Nintendo Power Gloves For VR

Nintendo has come up with some brilliant products in the past that reminded us the power of imagination, creativity, and innovation. One of those items was the Nintendo Power Gloves that allowed users to play games in a futuristic sense. Created by Mattel, the Power Glove allowed you to play 2D games with this unique motion-sensor controller.

The Power Glove was first released in 1989 that came equipped with 8 bits of power and 2 transmitters that allowed you to play games such as Rad Racer. Now, with some clever engineering, you can use the Power Glove on the modern VR platform.

Some creative minds at Teague Labs were able to re-utilize the glove using the HTC Vive tracker to bring it into the 3D world. They were easily able to use hand gestures with the available data. They rigged up a hand model to respond to the sensor data of the Power Glove and worked pretty easily. Teague Labs were also able to create a demo based on the original Power Glove Branding where you can shoot lightning by making a fist.

One of the benefits of using the Power Glove on an HTC Vive is that users can simulate more natural interactions. You’re able to pick up objects that have Vive Trackers attached to them whereas the Vive wand wouldn’t allow you to do so since you are gripping the controller. The team was able to test this with an iPad and found that the overall experience improved dramatically when using the glove. “The acrylic iPad even provides the same haptic feedback as a tablet would,” said the Teague Labs team.

To demonstrate the strengths of the Power Glove, they’ve created another game (rock, paper, scissors) where players must shoot them with the correct countermeasure by forming their hand into the right shape and aiming at the oncoming targets.

With their tests, they’ve found that the Vive Trackers currently allows for 3 analog values to be sent, which creates a little lag because it forces users to alternate the middle and ring-finger values.

“This project was a quick way for us to learn about the Vive tracker, hand-tracking, and explore some simple interaction paradigms for VR,” said the Teague Labs team. “It’s interesting to see the affordances that hand tracking brings to VR interactions and what still needs improvement. Holding virtual objects, touching mock-up screens, and pointing at things just feels a lot better when using the dexterity of one’s fingers instead of trying to use a fixed wand. At the same time, small discrepancies between the hand and its virtual model can cause irritation, especially when interacting with other physical devices, like in the tablet application. Overall, we are pretty happy with the early results and are looking forward to putting the glove to use in some future projects.”

For those that are curious in re-purposing the Nintendo Power Gloves like the Teague Labs team, you can check out the GitHub file they uploaded and the codes provided by matzmann666. You will need an Arduino Due for the glove and a pair of the Vive Tracker.