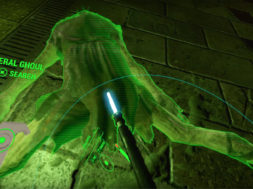 Last year in 2017 Fallout 4 VR became the highest earning VR game on the Steam marketplace. It’s estimated that the game earned more than $4,475,520.00 with more than 74,592 users owning a copy of the game. To further the shelf life of Fallout 4 VR, Bethesda is allowing mods to be added onto the game and we recently found out that you can wield a lightsaber like a Jedi to take down your enemies.

A popular YouTuber named BestAtNothing has added a mod into his copy of Fallout 4 VR that allows him to alter his character and his companion, Dogmeat. In the video you’ll see how deadly the lightsaber is along with the V.A.T.S. system that allows him to slow down time.

Actually, with the combination of the two, it really makes it feel as though that you are a Jedi as your senses are heightened and you’re able to somewhat predict the future and outcome of your enemies.

If you’re interested in the Fallout 4 VR mod you can download it for free today and check it out for yourself. There are various other mods you can try out. The game is currently available on HTC Vive but you can use extensions to play the game on Oculus Rift as well.

There are also official updates for Fallout 4 VR that improves gameplay and fixes various errors. Make sure to download that if you have been noticing in-game resolution problems and stability issues.