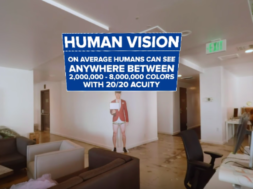 BuzzFeed is a well recognized digital media company that often releases entertaining and humorous videos about our society. But this week, they tweaked that idea and released a 360 VR video of perception. Human beings have 3 cones in their eyes that allow us to see a vast array of colors. But unfortunately, other animals aren’t privileged with that special gift.

This video by BuzzFeed demonstrates how animals might perceive the world through their sets of eyes. You’ll find the visual perception of animals such as cats, dogs, flies, snakes, and rats. They all perceive the visual world in a different way as their sets of eyes were developed for different purposes. The most interesting out of them all were the snakes. They visualize the world through heat sensing which is honed through their tongues.

They do a great job in providing descriptions and explanations of how and why animals might see the world in this way. This 360 video is definitely worth a gander and displays an interesting way to create content on the 360 platform. This video can be watched in VR with the use of Google Cardboard and Daydream View VR headsets.