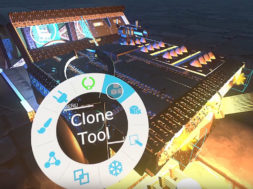 Modbox is a virtual sandbox with a focus on content creation, modding, and multiplayer. When it was first launched in April of last year, they wanted to give content creators the power to build whatever they want and evolve the game with them.

Recently a YouTuber by the name of ImmersiveGamer83 was able to create a Mad Max cruiser vehicle in Modbox using the enhancement features available on the app.

He states that it took him around an hour or two to build this awesome car. Something really cool you see in the video is that he actually drives the car that he has built. He can add mods that allow him to drive faster, shoot, and even give it hand brakes to give to drift.

The car actually looks pretty spectacular and to think allow users to actually drive their creation is very powerful. What do you think about this build?