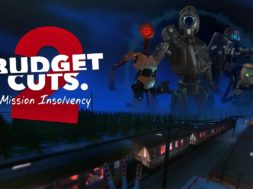 Neat Corp and Fast Travel Game has announced that they will be releasing a sequel called “Budget Cuts 2: Mission Insolvency” to their hit game.

Budget Cuts 2: Mission Insolvency will be a stealth action game built for the total immersion that only “heavily spatial VR experiences can bring, bound together with an epic story,” according to the team.

Budget Cuts 2 is the conclusion of the adventure that you started in Budget Cuts, but is also a self-contained game and easy to get into. While you were hiding and narrowly escaped certain death in your familiar office environment in the first Budget Cuts, Budget Cuts 2 is all about charging into unknown territory and taking matters into your own hands.

Budget Cuts 2 is set to release on December 12th for the Valve Index, HTC Vive, and Oculus Rift. If you have been a fan of the original game, you will probably end up enjoying this as well.