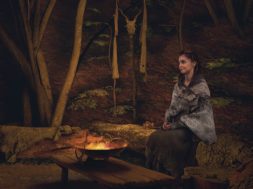 Sky Atlantic and Sky VR has released a VR game based on their 2nd series called “Britannia VR: Out Of Your Mind.” This is an experience where you will enter an anarchic drama that follows the Roman army as they return to crush the Celtic heart of Britannia

In the dramatic lead up you will follow the Roman army as they return to crush the Celtic heart of Britannia, a mysterious land led by warrior women and powerful Druids. The VR experience invites you to explore and interact with the world of the show.

The experience takes place in 45AD where you find yourself in front of a blazing fire on a beach. On a table, you find a Roman goblet of wine and a Druid bowl of plants and flowers. With these items on a table you have to make a decision.

If you decide to inhale the Druid concoction you’ll learn the druid ways with Ania (Liana Cornell), join tranced out dancers at a psychedelic rave in the woods, dress as a druid, and witness the intense power of Veran (Mackenzie Crook).

If you drink wine from the Roman goblet you’ll become immersed in a world of Roman imperialism and power as you worship Roman Gods with Rufus (Ben Bailey Smith), pour liquid silver to make money, dress as a Roman soldier and witness the pomp and ceremony as Emperor Claudius (Steve Pemberton) and his five tonne elephant enter the Roman Oppida.

Britannia VR: Out Of Your Mind is a story driven narrative and you will follow along the series story. Currently, you can get a copy of the experience for free on Steam for the Valve Index, HTC Vive, and Oculus Rift. Make sure to grab and it and check out the intricate storyline of the series.

tags: ancient vr britannia vr out of your mind roman vr sky vr
previous Angry Birds: Isle of Pigs Will Allow You To Build Your Own Levels
next Find Your VR Escape In Abode 2
Related Posts