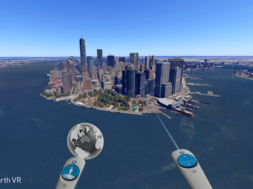 Google is hosting an event at NYC’s Whitney Museum of Art to unveil their brand new version of Google Earth at 8:30 AM EST on April 18. Many details are still unknown, which is part of the fun, but we’re willing to bet that it will have a major VR component after they released this virtual reality version of the planet-visualizing app in November 2016.

At the time of launch, the app was only available on Steam for HTC Vive headsets, but the team promised to add support for additional platforms in the near future. It seems like the natural progression here would be an update for Google Daydream, which would make it much more affordable as a VR educational tool.

Google has also been developing other VR projects for the past few years now such as stand-alone virtual tours and augmented reality museum experiences. Do you have any other guesses of what will be revealed on April 18? We’d love to hear your input in the comments below.