Boston Dynamics Invented A Robot That Can Self-Open Doors 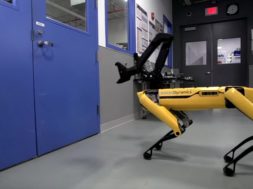 Boston Dynamics Invented A Robot That Can Self-Open Doors

Boston Dynamics is back again with a new series of robots that is ready to blow your mind. This time, instead of having a robot do backflips, we have a robot that can self-open doors. If you were one of the few people like me who thought they were safe behind closed doors, think again.

This robot demonstrates the capabilities of robots as they continue to advance in AI and programming. While opening doors can be a simple task for humans, a new layer of codes and programs have to be created for robots. Boston Dynamics demonstrates the strengths of their technology through the Spot Mini model.

Previously, Spot Mini was able to pick up items but this is the first time we’re seeing the robot open doors. While the robot is long ways away from being consumer-ready, we can see the glimpse into the future through Boston Dynamic’s technology.

Should we be afraid of the robot? Not really. The Boston Dynamics Spot Mini robot was designed to assist us in our daily lives by being able to carry payload and helping move things around. The Spot Mini is able to climb stairs and move around in office settings. It is also operable in home and outdoor settings.

The Spot Mini isn’t available for consumers and is a part of R&D. Boston Dynamics is currently owned by SoftBank which was previously owned by Alphabet, parent company of Google. The robotics company will continue to test and research the field and create better and stronger robots in the near future.