Boston Dynamics Atlas Is Slowly Becoming That AI Humanoid From ‘I, Robot’ 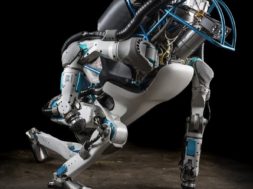 Boston Dynamics Atlas Is Slowly Becoming That AI Humanoid From ‘I, Robot’

Standing at 1.5 meters and weighing in at 75kg is Boston Dymanics’ humanoid Robot called Atlas. This monster of a machine is currently able to hold 11kg in payload with 28 joints and LiDAR and Stereo vision.

Atlas is the latest in a line of advanced humanoid robots that Boston Dynamics is currently developing.  The Atlas’ control system coordinates motions of the arms, torso and legs to achieve whole-body mobile manipulation, greatly expanding its reach and workspace.

The robot mimics the phyiscal human form with 2 arms, 2 legs, a torso, and a head. Atlas’ ability to balance while performing tasks allows it to work in a large volume while occupying only a small footprint. The Boston Dynamics team has been developing Atlas over the course of many years and have made many iterations of the robot.

The most recent version of Atlas however offers some tremendous updates. Atlas is now capable of jumping from 1 box to the next without touching the floor while weighing over 75kg which is the equivalent of 165lbs. What’s more incredible is that Atlas can do backflips.

Yeah, this humanoid robot is capable of performing some incredible acrobatic moves that many humans aren’t capable of. If you watch the video carefully, it shows how the robot creates momentum like real humans do to achieve a certain motion and movement.

The Atlas is comprised of 3D printed material to save weight and space, resulting in a remarkable compact robot with high strength-to-weight ratio and a dramatically large workspace. Stereo vision, range sensing and other sensors give Atlas the ability to manipulate objects in its environment and to travel on rough terrain.  Atlas keeps its balance when jostled or pushed and can get up if it tips over.

If you're not concerned about AI safety, you should be. Vastly more risk than North Korea. pic.twitter.com/2z0tiid0lc

The Atlas is looking ever more closer to the humanoids in “I, Robot” starring Will Smith. Atlas is capable of achieving super-human strength and hopefully, it won’t be used to harm real-life humans. Always remember what Elon Musk said. “If you’re not concerned about AI safety, you should be.”