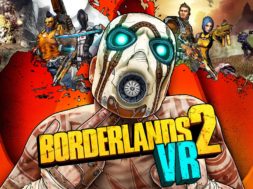 The ever beloved Boderlands 2 game by Gearbox is finally heading its way to PC VR users. The company announced that it will be releasing the game on Oculus Rift and HTC Vive starting October 22nd for fans.

Borderlands 2 has been one of the highest rated games with while the 3rd iteration of the game has been receiving high praise as well. While the 3rd game isn’t available yet on PC VR, users will be able to revisit the magnificent world that was created in number 2.

Players will enter the world of Pandora and become a treasure treasure-seeking Vault Hunter facing off against the galaxy’s most charming psychopathic dictator – Handsome Jack – with nothing but your arsenal of 87 bazillion guns.

Borderlands 2 VR will feature the comic book like graphics with your trusty companion from the original game. You will battle monsters with your customized guns, weapons, and rifles.

The PC VR version of the game should deliver a crisp experience that we are all familiar with in the original game and provide that load of fun. You can download the game on the Steam store today for $49.99.