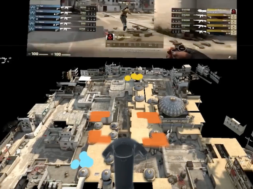 eSports is a meteorically rising industry with a tremendous global audience. Through many studies, it’s been unveiled that eSports is forecasted to reach $5 Billion in revenue by 2020. With that much traction, many companies have been finding ways to seize the moment and Boom is one of the latest startups to do so.

Boom is the world’s first 3D live streaming platform for eSports. You’ll be able to watch replays with multiple cameras angles and have the option of streaming eSports matches in VR. They use an advanced form of technology that’s incorporated into their software to take 3D data from the game and allow streamers to see in their favored perspective.

This 3D streaming company has announced today that they’ve closed $3.5 million dollars in their seed round from the listed VCs:

The Boom platform is used by streamers to broadcast gameplay on Twitch and YouTube. But their aspirations are to fulfill the next generation of online eSports streaming. With the use of their 3D technology, Boom hopes to feed livestreams into VR headsets following the viewer’s favorite eSports athletes.

Currently, Boom covers games such as League of Legends and CS:GO which are two of the most popular games on PC. They look to expand their coverage soon with the latest round of funding.