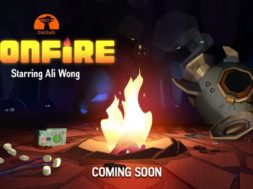 Baobab Studios, home to some amazing VR movies such as Asteroids!, Invasion!, and Crow: The Legend has announced their next big project called Bonfire featuring Ali Wong.

Bonfire is an absurd alien adventure written and directed by Baobab co-founder Eric Darnell, who co-directed and co-wrote all the films in the Madagascar franchise and Antz.

In Bonfire, the latest virtual reality interactive narrative from the award-winning Baobab Studios, you play the leading role. As Space Scout 817, you are on a mission to discover a new home for the human race after it has made a mess of Earth. The stakes are high. Too bad your piloting skills lack… precision. In fact, you crash-land at night in a mysterious clearing of an unknown planet three-hundred light-years from Earth. Your only source of light is your makeshift bonfire. Beyond its glow everything falls to darkness. And what are those strange noises coming from the alien jungle?

You have only your instincts and your robot sidekick, Debbie, to guide you. Voiced by comedian, actress, and writer Ali Wong, Debbie’s companionship comes with a signature wariness. When a chance meeting with a local inhabitant further steers your mission off course, you learn that unexpected encounters just might result in lasting friendships. In this intimate setting, you have the opportunity to embrace, explore and influence the world around you, and, perhaps, make new friends. In the end, the choice is ultimately yours: Will you follow your captain or your conscience?

“We wanted to put the viewers in the middle of a story where they can develop believable, meaningful relationships with other characters so that the viewers feel that their interactions with these characters have legitimate stakes — that their decisions really matter,” explains Darnell.

Wong adds, “When they asked me to voice a character for a virtual reality experience, I thought I was going to be an action hero lighting garbage cans on fire. I didn’t know it was going to be this story that could go in several directions depending on the viewer’s choices. And when I finally watched Bonfire with the goggles and everything, I was surprised by how touching and fun the whole experience was.”

As far as release date goes for Bonfire, Baobab Studios hasn’t given an exact date. Rather, they have stated that it’ll be “coming soon.” We hope to see the release of this unique VR movie experience soon in the near future.