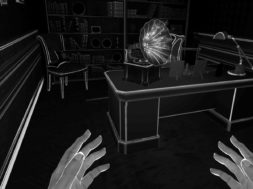 Tiny Bull Studios along with indie label Surprise Attack Games have announced a new upcoming VR title called Blind. Instead of basing everything around guns, cars, space, and etc., the studio is taking a unique approach to virtual reality by including echolocation into the game.

In Blind, you wake up in a strange room with scant memory of how the character came to be there. But as quickly as the game begins you’ll soon discover that you (a young woman) have lost your sense of sight. Goaded by the mysterious Warden, you must explore a twisted and frightening mansion using echolocation. Sound waves briefly reveal the outlines of objects, enabling you to navigate the mansion, solve puzzles and uncover the mystery of what is happening and why. As she gets closer and closer to the truth, however, she will be forced to confront her worst enemy – that which she does not, or will not, see.

The narrative-driven puzzle adventure game features around four to five hours of gameplay and will be releasing in Spring on the Oculus Rift and HTC Vive with a version for PSVR releasing later in 2018.

This is quite a unique approach to a VR game as most games are straight forward with their objective and content. Being “blind” in VR is something rather new and adding echolocation will be a welcomed change to the platform. We will be doing a hands-on demo of the game so stay tuned.